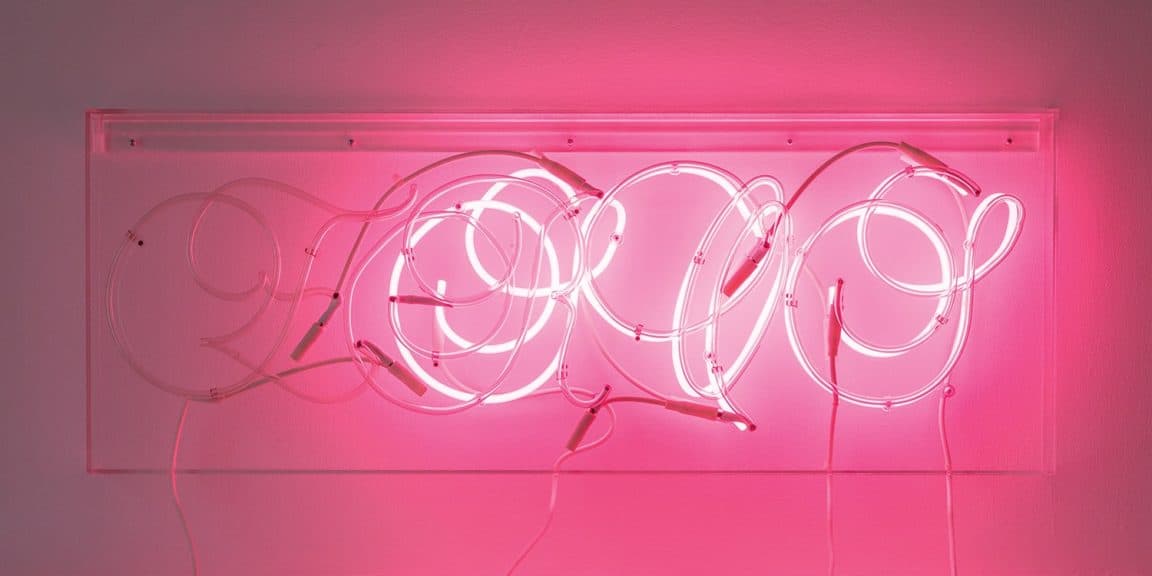 There’s few artworks as powerful as those which speak directly, even personally, to you. Much is ascribed to “Art”, especially in the “Trumpian” era where (too) many presume artists are magical unicorns and saviours. Frequently, that’s aggrandizing bullshit from charlatans. Rarely, it’s so true that it leaves you silent and almost shocked at how the artist managed to reach into your heart and place it on the wall; even, as with Brendan Fernandes’ Philia, to evoke people and times you’ve forgotten, and leave you wondering how you mislaid that history, manifest in friends and family, that was / is so important. There’s power in artworks “where the past could pull you backward.” (Piccirilli)

Philia is part of the first installment of Emma German’s year-long Rodman Hall curatorial project Up Close and In Motion. I’ll be sitting down with Emma to talk more about it, and the ideas behind it, in future issues, as it changes and as local artists respond visually. This current chapter in this visual history of RHAC (and the reflected larger community) has three works, in the Hansen Gallery. Don’t mistake my singular focus on Philia as dismissing Genevieve Cadieux’s Séquence no. 7 or Michel Daigneault’s Tremor #1. They both deserve your time and repeated visits.

Fernandes’s piece was part of his exhibition Brendan Fernandes: They, at RHAC in 2014. Philia was part of “Encomium, a performance work based on a series of written scores that were inspired by Plato’s Symposium, a classical text in which love is examined through speeches of praise. Performed at Rodman Hall… Encomium consisted of two male dancers tenuously counter-balancing before separating.”

Philia sits above one of the offwhite marble fireplaces, in the left hand room as you enter the Hansen space. Neon and plexiglass (from an edition of three), the letters flash in pink then red, spelling out EROS and SOS, respectively. The font is decorative. The room pulses. Fernandes’ art is often shaped by his training in classical / modern dance, and Philia is “a repetitive dance that communicates conflicting messages of love and caution” (from the didactics by German). 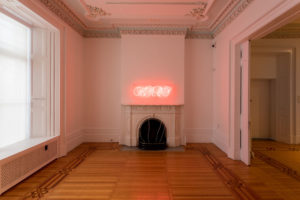 However, its the following that elevated Philia: “In alluding to SOS, a universal signal of distress, Fernandes makes reference to the ongoing HIV/AIDS pandemic, and the effects of pain and loss felt when love is severed.” And I was suddenly reminded of the blind spot in Canadian art history regarding the (too) many artists lost to HIV/AIDS, and the many works that are truthful and tragic mementos of that time. Among the best is General Idea’s One Year of AZT (a room filled with giant pills, of a drug that was one of many hopeful / hopeless failing treatments. I recommend the fine movie Dallas Buyers Club to revisit that crisis). G.I.’s reworking / updating of Robert Indiana’s LOVE series (blissful psychedelia executed in the 1960s) into AIDS (remember when Maggie Thatcher floated the idea of HIV camps? Memory is dangerous and necessary, and Art — note the capital — a landmark for uncomfortable remembering).

Only one member of General Idea remains: the deathbed portrait of Felix Partz (Felix, June 5, 1994) by AA Bronson is horrifyingly intimate. There’s an oft cited (and misunderstood) line from Adorno: “To write a poem after Auschwitz is barbaric.” Some interpreted that as a moratorium: others understand that its necessary to speak “barbarically”, not to ignore (like lurid neon, enticing with a throbbing pink pulse, a bit raw. Or a deathbed portrait of Partz succumbing to an epidemic that was too often “invisible”). 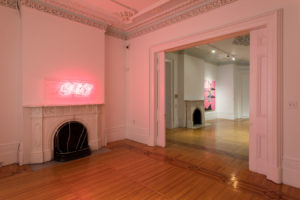 Fernandes work’s a bit gaudy: too bright, too loud, too flowery; somewhat brittle and facile, like an overtly false smile, hiding sadness, and the delicate frailty of the neon almost openly alludes to hollowness (a memento mori in inappropriately vibrant drag). There’s ides of “performative masculinity” that suggests you can’t be weak, you can’t be vulnerable, you can’t be unsure or sad or weeping or soft. The emphatic, neon urgency of Philia eschews that.

Fernandes’ artwork is often performative: so its unsurprising that Philia is an “active” work with its “heartbeat”, but how it plays on the domestic Hansen gallery enhances this. The room seems so empty, like something / someone is absent, and the “words” over the mantle are indexical spurs to recollection (Amy Friend’s exhibition Assorted Boxes of Ordinary Life used the fireplace in a similar manner, with familial “heirlooms” installed above it, as repositories of memory. RHAC again employs its “domestic” space well).

I’m old enough to have lost a number of friends to HIV/AIDS. I remember Day Without Art, when, bluntly, it mattered. On my repeated visits to RHAC, the words of Ursula K.Le Guin resonate: “There are always areas of vast silence in any culture, and part of an artist’s job is to go into those areas and come back from the silence with something to say.”

Up Close and In Motion will evolve over the next year: several artists will be installing visual responses to differing incarnations, as curated by Emma German. A curator’s talk (and talk with The Sound) is upcoming.