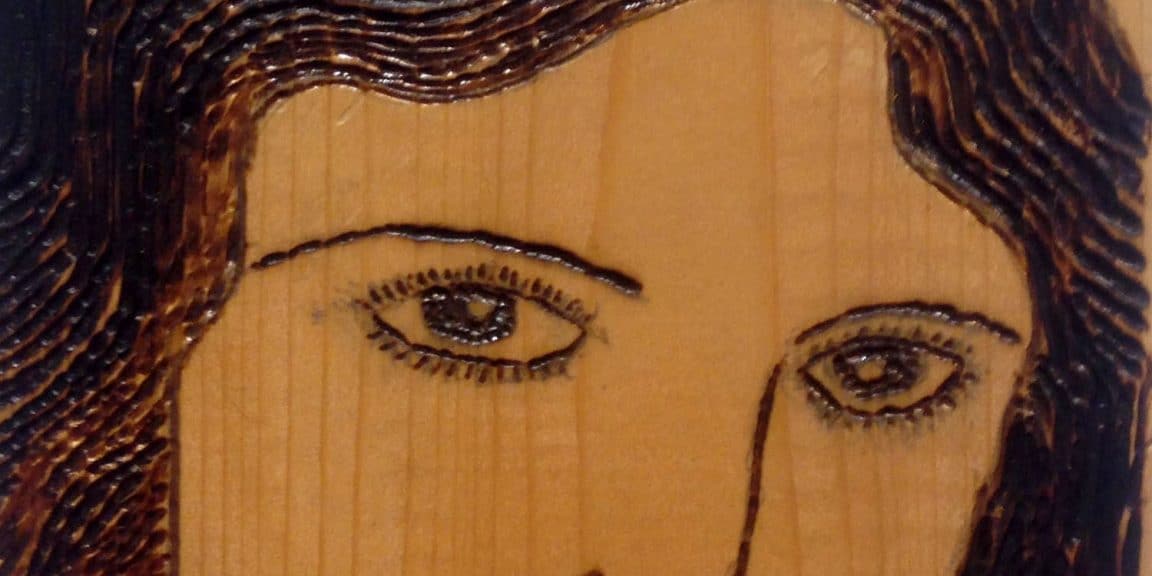 Sheldon Rooney’s work is often derivative: I don’t mean that in a derogatory manner, but his work takes its inspiration, its genesis, from elsewhere. His ongoing series of album covers, for example, or works that reference musicians or actors, are illustrative interpretations of his musical and cultural interests. He was recently nominated in the Established Artist Category for the 2018 St. Catharines Arts Awards (sadly, he didn’t win, but this year saw a deep ocean of quality nominees. Buy one of his works to make it up to him, ahem, #buymoreart).

In the latest incarnation of Up Close and In Motion, the same wall that recently had Tobey C. Anderson’s work exploring his mortal illness, or that had Janet Jones’ abstracted suffusive paintings, is now filled with many small portraits of different writers of import to Rooney (these are delicate wood burnings where the lines and details so common in Rooney’s work seems to belie this process). Rooney’s playful humour is in the title: Writers’ Blocks is both the name of the series, and a literal description of the work, and also references the malady of the not quite same name.

An amusing side point, that also will hopefully inform your enjoyment / interaction with Rooney’s work at Rodman. I realized in thinking on this work that I rely greatly on literature, and in conversations for articles about artists like Melanie MacDonald or Clelia Scala, literature was a common point, that informed and deepend how I understood their practice, and what they were making.

So, in light of that visual “sampling” of Rooney’s reading, I offer a “review” that bookends: Rooney chooses writers to illustrate, to depict, and I have chosen images of these writers and will offer an excerpt of their writing, that is important to me. From words to images back to words: your intrepid #artcriticfromhell offers this non traditional response to Rooney’s work, furthering some of the ideas that curator Emma German has highlighted with her focus on Slow Art Day, but also with presenting artworks that demand visual attention, and considered looking. Writing about art has almost always been about literature, for me, too, and one of the authors Rooney offers as a portrait (Robertson Davies) was an early influence in this area.

“So, let us go then, you and I” (T.S. Eliot, whom I don’t remember seeing among the faces Rooney rendered here), and here’s my selected “biography” of the authors Rooney has “sampled” for us. Your intrepid #artcriticfromhell suggests you seek these authors out, and read them yourself, and see why the artist consideres them worthy, and why I find such joy in his “library.” 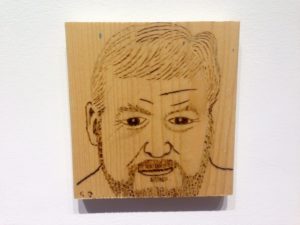 Anaïs Nin: “Worlds self made are so full of monsters and demons.” 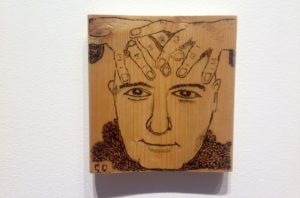 Jack Kerouac: “Whither goest thou, America, in thy shiny car in the night?”

Sir Salman Rushdie: “A poet’s work … to name the unnamable, to point at frauds, to take sides, start arguments, shape the world and stop it from going to sleep.”

Walt Whitman: “Some people are so much sunlight to the square inch. I am still bathing in the cheer he radiated.” 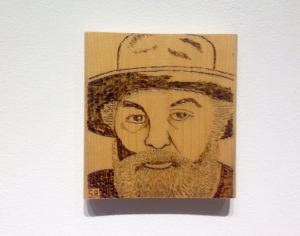 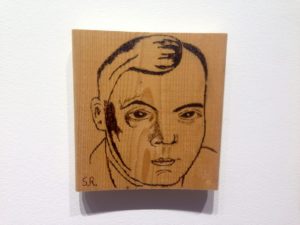 W. Somerset Maugham: “People ask you for criticism, but they only want praise.” 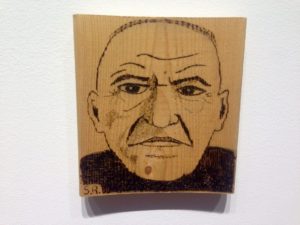 “i like my body when it is with your
body. It is so quite new a thing.
Muscles better and nerves more.
i like your body. i like what it does,
i like its hows. i like to feel the spine
of your body and its bones,and the trembling
-firm-smooth ness and which i will
again and again and again
kiss, i like kissing this and that of you,
i like, slowly stroking the,shocking fuzz
of your electric furr,and what-is-it comes
over parting flesh….And eyes big love-crumbs,

of under me you so quite new” 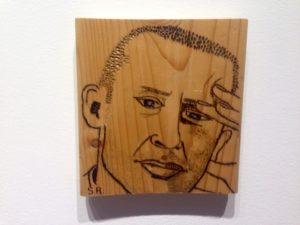 George Orwell: “I tell you Winston, that reality is not external. Reality exists in the human mind, and nowhere else. Not in the individual mind, which can make mistakes, and in any case soon perishes: only in the mind of the party, which is collective and immortal. Whatever the party holds to be truth, is truth. It is impossible to see reality except by looking through the eyes of the Party.” 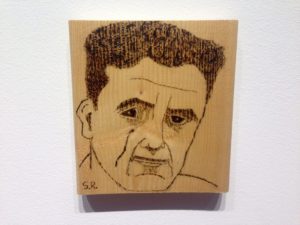 Sheldon Rooney’s many “portraits” that make up his piece Writers’ Blocks is on display at Rodman Hall, as part of the most recent version of Up Close and In Motion, right now. This exhibition shifts often, so go soon, and go often.

You can see the entire series here, along with other work by Rooney.