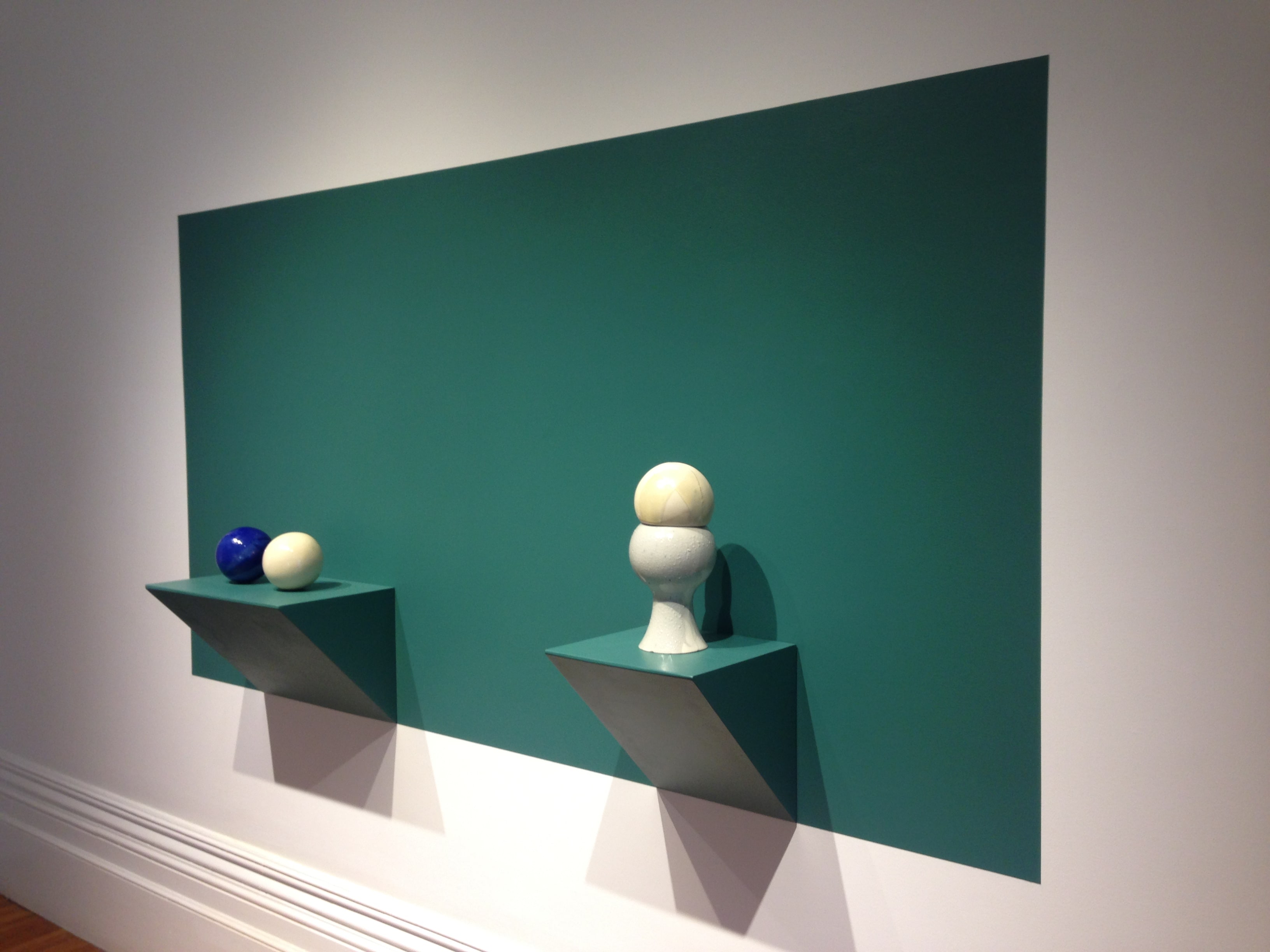 I am a fan of the uncanny, the “odd” artwork, in collections and in exhibitions. Perhaps this is a side effect of my work in various art gallery vaults and archives. When you’re intimately familiar with mandates and directives, bloodlessly glued together by committee and veering inevitably into the inoffensively banal, to come across an art work either freaky or phantasmagorical can be endearingly pleasing.

For example: for several years I toiled in the University Collection of (what passes for) the University of Saskatchewan. Part of a mad crack team engaged in the first ever full inventory of that often gluttonous, often clotted (conceptually) morass, you could become inured to the historical speed bumps of karaoke modernism™. Or how many faculty gleefully steal works off walls to take home (‘but I thought that Rauschenberg was mine, after all these years’…or buy me a drink and I’ll tell you how we had to almost call security to get into the University President’s residence, and that was ONLY to appraise and confirm the art that was supposed to be there. I might build upon Atwood’s assertion in Cat’s Eye about how too often ownership is equated to creation, and here it was really just “borrowing” being equated to “ownership.” Apparently, academics don’t just thieve ideas…your intrepid #artcriticfromhell entertains, but digresses, ahem).

Yet sometimes you encounter a work as obtuse physically as it is disturbing visually: a two by four foot piece, covered in tiny ceramic baby faces, white porcelain row after row, with one three times larger and brightly yellow in the middle left side, like a three dimensional flag of #babyfaces (don’t ask me the artist’ name, as I uncharacteristically dis remember). How it got in the #usask collection no one could say, and if it ever saw the lights of a gallery space or installation spot on campus before I documented and made a file for it, I’m pretty sure it never did after (I did suggest to the long suffering if somewhat inept Director that I’d love to curate it into a show, perhaps with Alice Cooper’s Dead Babies wafting down. It was hollow, so we could disguise the audio components within it. This received less than enthusiastic support…a prophet is without honour, whatever, pearls before swine).

What is that I hear? “What is the point of this latest amusing, if self indulgent, tangent?” Well, let me explain.

The latest iteration of Up Close and In Motion is one that has more works than previous, and has works that span a few different eras and ideas: my tangent about unusual and unexpected works in collections connects to this version of Up Close because of one work specifically, but also how this art work interacts and influences others in the Hansen space.

But first, let me recount the works in the space, beginning with the one that set me down the path of considering eerily engaging art works: this is Douglas Boutilier‘s Tennis Twins, in the front of the two rooms that comprise Hansen, looking across the space towards Jimmy Limit’s work above / on / intervening with the fireplace mantle. 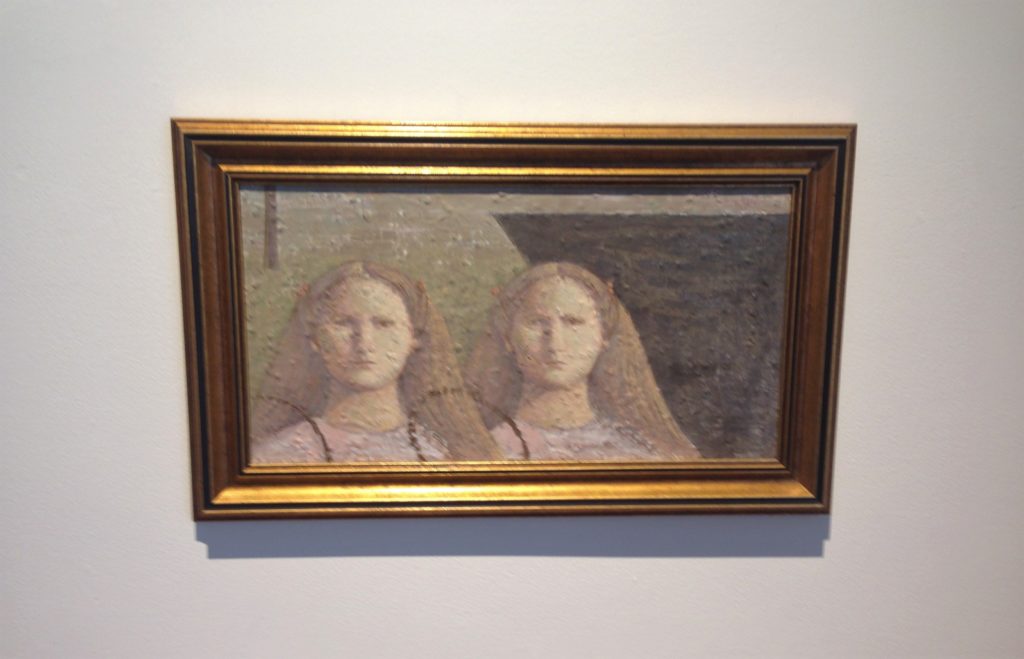 I’m pleased Tennis Twins is in a separate room, to allow for the examination and space (a Slow Art Day approach, one I must repeatedly credit curator / writer Emma German, who was the force behind previous Up Close installations, for introducing to me) it requires. Alternately, Limit’s untitled (stoneware, ceramics) in the “second” room has a conversation with Herbert Bayer‘s Two Sinking Spheres (a serigraph – silkscreen print – that employs the flatness and richness of colour of that medium well, and is a year younger than I, ahem) and Jeanne Rhéaume‘s more “traditional” Nature Morte aux Tomatoes, sitting above the fireplace, facing untitled. The scabby textured abstracted tomatoes (I have spent much of this summer gardening, and have lost many a battle to the ants and the weather with my tomatoes, but also won a few, so I see rotted and soft and succulence all in the same still life here. A personal preference is also for the naming of works with “nature morte” instead of still life, as it offers a playful take on the immortalisation of something meant to be fleeting, a memento mori that makes the art historian in me also consider the works of Joel – Peter Witkin, who photographed luscious and evocative “still life / nature mortes sometimes with cadaver parts among the fruit….)

The orbs of Bayer’s work (I mentioned that it dates from the early 1970s, which is clear in its formal elements, whether minimalist or still pushing [M]modernism) echo the tomatoes of Rhéaume which – in a triangle of aesthetic resonance – are present in the blue and white orbs of Limit’s untitled. The slab of green painted wall behind Limit’s sculptures, the twinned shelves upon which the objects sit, and the play of shadows on the walls below the artwork all repeat formal geometric elements found in the works, or the idea of “twinning”, of repeated imagery, whether the circles of Bayer or the women of Boutilier.

Many of the works here are vivid in colour (Tennis Twins is the exception, but the gaze of the women as their eyes follow you critically – disapprovingly – around the rooms have a power, too) but what is fascinating to me here is how I found myself referring to this show as the “Twinned” Up Close, for the objects of Limit (2018), the globes of Beyer (1973), the gunky red ovals of Rhéaume (1950) and the sisters / clones / dopplegängers (a woman and her fetch, perhaps, but I’m also reminded of the trickster, chameleon Manitou that wore many faces, even your own) of Boutilier. Sometimes a simple approach, an almost “banal” to return to that word I used as an insult earlier, allows for subtle and yet significant “strings” to be drawn between very different works, from very different periods, and very different hands.

Up Close and In Motion has been installed in various forms and formats for nearly a year: channelling the official gallery voice, the upcoming “phases” of 8 through 11 “will feature St. Catharines-based artist Jimmy Limit selecting works from the permanent collection and creating new works in response. Limit’s photographic work illustrates his interest in objects for their formal characteristics, rather than function.” Limit had one of the more engaging exhibitions at Rodman of the last decade, curated by Marcie Bronson, in 2014, titled Recent Advancements. Formal aspects have defined his choices here, in Phase 8, where “he has selected three works that depict doubles….[the] green paint used for the plinths and walls behind his works is taken from a green in the Jeanne Rhéaume still life…and a similar hue is also found in Herbert Bayer’s Sinking Spheres.”

Limit‘s own practice highlights “varied subjects for their aesthetic interest rather than function,…[engaging] them from a strictly formal standpoint by stacking, balancing, and arranging them to establish interesting visual relationships that emphasize similarities or contrasts in colour, shape and texture. By taking common objects out of context, or altering their appearances through industrial techniques like powder coating and ceramic casting, Limit makes them seem strange and forces us to look at them in new ways.”

This manifestation of UCIM runs until early October: as a side note, Heather Hart’s Northern Oracle will have an opening reception on November 1st, and you can follow RHAC on social media for details about adjunct programming (talks, workshops, etc.) around Oracle.