“..an aesthetics of interaction.”(Don DeLillo, Cosmopolis)

“We’re not complaining that the values people once believed in are now empty; to the contrary, we’re doing our best to empty them more and more. Get used to it. Stealing is a thrill in itself; this enjoyment is the real reason for postmodern appropriation. We aim to undermine those “convictions” of authenticity and truth, of proper meaning and right order, that sometimes seem to be as dear to Marxist dialecticians as they are to bureaucrats in the Pentagon. Speaking in my own voice is a tedious chore, one that the forces of law and order are all too eager to impose. They want to make me responsible, to chain me to myself….But forgetting myself, speaking in others’ stolen voices, speaking in tongues: all this is pleasure and liberation. Let a hundred simulacra bloom, let a thousand costumes and disguises contend.”(Steven Shaviro, Doom Patrols: A Theoretical Fiction about Postmodernism)

“I only wanted to find great people and let them talk about themselves and talk about what they usually liked to talk about and I’d film them.”(Warhol)

If you’re following some of the more entertaining (if insular and a bit masturbatory) debates in the art world right now, there’s a concerted number of voices decrying the academicization of art aesthetics – which essentially means the elimination of them to serve the politics of the moment. This manifests in different ways, whether in that works are solely to be interpreted through a specific ideological lens or only considering specific groupthink (or approved ideology, edit as you will), ignoring and denying all other.

I might suggest an example in the recent interpretation of Atwood’s A Handmaid’s Tale which has handmaids that are African – American, which in Atwood’s book was biblicaly impermissible to Gilead’s theocrats, as non whites – whether by biological or social designation (such as Jews) – were deported or executed. It’s an interesting tell of the ideology of the producers of this series, that Atwood’s novel’s reach (abuse of power in the name of religion being no surprise) is narrowed to serve a very specific interpretation (the abuse of women in the name of religion being no surprise). It’s reminiscent of the debate as to whether Hillary Clinton lost the last American Presidential Election, or if Trump won it…and that historical event clearly delineated that many ideologies don’t always intersect smoothly. To offer a further nod to Atwood’s Gilead, it’s like how calling oneself a “Christian” can mean anything, or nothing, and that Atwood, in her book, showed clearly that enslaving anyone in the name of your invisible friend is a poor, poor thing. End of tangent.

This is one of the ways in which art schools and their respective ideological apparatus limit dissent and reinforce their own propaganda. In his excellent book on Art and Sociology, Editor Jeremy Tanner asserts that art historians often value works that sociologists dismiss and vice versa, and that where their ideologies overlap in an “art object” (an inexact, but workable term) is as rare as a unicorn. “Taste is the enemy of art” declared Marcel Duchamp infamously, and Warhol’s further fracture of what might be called high or low taste is well known, and still reverberates.

I recently attended an artist talk where Warhol’s image of Marilyn – do we even need a last name – was shown as how “pop” and “art” meet and take on a viral life beyond even what McLuhan expected or guessed at…and the artist in question was / is still producing versions of Warhol’s Marilyn that further challenge – or collude with, or enhance, or erode – taste, consumerism and capital. This article is an interesting one, in that light, and this rebuttal is also worth considering.

As to where I stand in this debate, I find myself more often channelling Bartleby and asserting that I’d rather not…..or more exactly, I prefer to take things as they are, at times, in a more Modernist assertion of social interactions, and am less interested in a post structural framework that, as postmodernism eats its children alive, hurtles us towards cultural immolation by means of Trump or Clinton, a post truthiness where ideology eschews all the things that make Art enjoyable and accessible, and yet still challenging….

It might seem strange that the previous tangent was inspired by Cooler Than Cool (Ice Cold), a collaborative  exhibition by Katie Mazi and Jenn Judson. It’s a show that borders on silly, and that refuses – simply will not – take itself seriously. Yet in doing so, it offers an amusing and sometimes very slick demonstration of the joint nature of creation (beyond the artists to the models, even), how photography can beautifully capture a performative experience, and that it is good, sometimes, to take what you do seriously, while never taking yourself so, in that vein.

The teasing online statement they provided was minimal, but inviting: “Do you like art and do you like to laugh and/or cry? Good. It’s a photo show. Two amateur photographers, ten plus+ amateur models and one new body of work. Some call the photos dumb, others call them sexy. It’s up to you to come to the show and decide for yourself. Kate Mazi and Jenn Judson present to you: Cooler Than Cool (Ice Cold). A photo based exhibition that you have to see to believe.“ 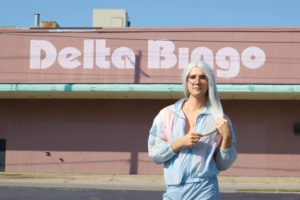 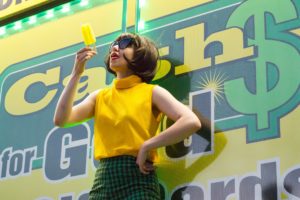 The works in the Dennis Tourbin space at NAC are primarily photographs: but there’s also the clothing, and some items, presented, that were part of the tableaux that the artists present. The images are kitschy and cheesy, seemingly frivolous, and the models seem to invite us to join in at their unselfconscious self mockery, that is as clear and bright as the colours.

The titles are as evocative, as they are silly: I’m reminded of children’s toys or games, which fits with the aesthetic of play in that these are like Halloween costumes, or children (in age or at heart) playing dress up. Daddy Cool, Hot Wheels, Fresh Cut, Iceboxxx, Bingo Babe (my favourite), My Name Is (Gator Ray) and Dynamite Dude are all titles that (as they’re listed separate from the photo works, as the pieces are numbered on the wall) you can easily match to the images, after an initial tour of the show.

In conversation with the artists, several ideas came to the fore: the idea of “throwing people off, producing something that seems familiar but then jars”, a seemingly familiar aesthetic which then falls apart with the models, purposefully fracturing the initial reading of the images. All the models are amateurs, and friends of the artists, and from various communities other than / including the visual arts, so there’s a freshness and honesty to the roles they perform that’s not overtly determined by expectation. Both Judson and Mazi sheepishly describe themselves as hoarders when it comes to clothes and items that were relevant to Ice Cold, and that immediacy in a personal space also manifests in how the sites range from St. Catharines to Hamilton to Niagara Falls to Grimsby. Taking this aspect of the local further, an earlier version of this was displayed across the street on St. Paul, at the Mahtay Cafe, with the catchy title of They Hate Us ‘Cause They Ain’t Us 2017. It’s very fresh work, so not as clearly defined in their minds and more about the creation – the performance of it – at this point. They collaborate in a very seamless manner, with no specific roles but both doing everything (both work at the same place, and there’s an intensity between art and life with the creation / process of these works) that is echoed in a “real willingness of the models to become the characters”. As this is a continuing body of work (there was also a piece in the #Canada150 exhibition at City Hall, in downtown St. Catharines, playing upon the attraction / repulsion of tourist traps, and on a subtle level explored the dependence of the economic health of the region on this industry), Mazi and Judson talked about future video pieces, and the works at NAC are surely cinematic (both in the larger than life personas and in the graphic and vivid nature of the “scenes”). Their artistic choices were “made on the fly, reactive and immediate”: even though you’re only seeing one image for each character, there are about ten photos selected from each shoot, and “uniqueness” within the larger narrative of all the characters and images and scenes is important. The characters “should be individuals” within the larger story that Mazi and Judson are creating here…so some basic parameters are set, and then flexibility, in terms of interacting with the models and the sites, lead to results that are only partly expected, but more about possibilities.

There is the idea of kitsch, for sure: works that evoke an emotional response over an intellectual one, and that’s applicable here. But that’s also a superficial reading that doesn’t do the works full justice, as there’s also a sense that this work couldn’t be made anywhere else other than a region that is so tourism dependant (the same way that Levine Flexhaug’s work had a different resonance here, with his paintings sharing a sensibility with the many and ongoing tableaux of the Falls).

Their statement in the show perhaps encapsulates it best: “Two years ago, a shared love of Muppet Treasure Island brought Katie and Jenn together. Since that moment, the two have realized that their lives connect in ways beyond foolish puppetry on the big screen. Combining both their closets and their sense of humour, this new collaboration series is an authentic blend of their individual artistic styles.

Cooler than Cool is a series of digital posters that challenge the aesthetic of what has been considered “cool” in the worlds of art, fashion and leisure. Each of these looks have been constructed in order for the characters to better perform their style. This work is era – less, timeless, worthless and priceless.

So bad it’s good, so wrong it’s right. Its Cooler than Cool.” 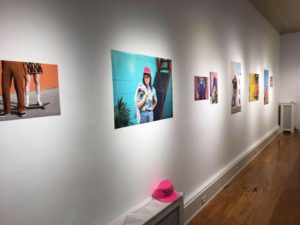 This collaborative, sometimes excessive, cinematic display of cultural fractures of “cool / not cool” is on display at NAC (Niagara Artists Centre) until the weekend of October 8th.

All images are copyright of the artists.